This program is about real power.

The Basics of 1 Touch Knockouts will teach you how to hit with power in a real fight, while in motion.

The Basics of 1 Touch Knockouts will teach you light force knockouts, short distance knockouts, and suddenness – sudden explosive striking power that lets you blast in your hit before they even realize you moved.

This is NOT a pressure point system. 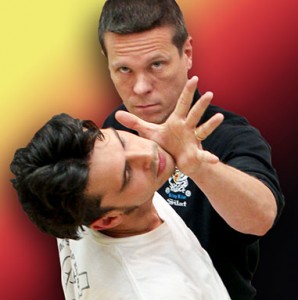 Hitting pressure points can result in impressive knockouts, but it is hard to do in a real fight.

Fortunately, hitting with real power and transferring that power is every bit as effective as hitting pressure points.

The focus in this program is not so much where you hit but how you hit.

You will learn a few pressure points and other ideal targets, but the power in the methods comes from the quality of your hits, not where they land.

If you hit correctly, any blow that makes full proper contact will have serious stopping power.

What is a Touch Knockout?

A Touch Knockout is not your normal everyday touch.

There is more than one way to do a 1 Touch KO.

Some methods are simple and some are quite advanced.

One of the more advanced skills that you will learn is how to touch someone with your whole body weight.  It is so surprising and powerful that it looks like they just got struck by lightning.

You also will learn how to enhance the power of your touch by using advanced structural alignment and proper body mechanics.

When you first begin training and developing 1 Touch Knockouts you must be CAREFUL, because what feels like an effortless touch to you will have a lot more power than you realize.

A Touch Knockout can incapacitate someone knocking them “out cold.” 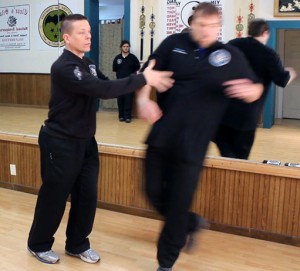 A Touch KO can stun, daze or confuse. It can cause overwhelming pain.

All these count as Knockouts for our purposes because it means the attackers are incapacitated. They will not be able to stop you from running away or otherwise ending the attack.

The Basics of 1 Touch Knockouts is not a demonstration. There are a lot of videos out there that have to do with pressure point stuff and what you see is a bunch of people getting knocked out in various ways.

That’s fun to watch, but it is not the same as teaching you.

Even if they’re calling off what points they are using, there are so many other factors that even someone who knows their points very well might not have the right qualities of touch and movement to get results.

It’s the quality – HOW you hit them – that’s important.

And so this DVD is NOT a demonstration.

Instead, you will learn HOW to build and use these skills.

There are some schools where they knock people out all the time. In our opinion this is quite mentally and physically unhealthy and causes long term damage to the person being knocked out. 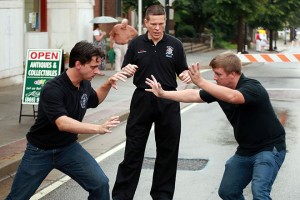 Sigung Clear teaching street self defense on the street

Sigung Clear began studying the martial arts because he lived in rough neighborhoods and frequently needed to defend himself.

This has led him to an in depth study of Kuntao, Pentjak Silat, Tai Chi Chuan, Xing Yi, Bagua, Kung Fu and other arts.

As well as the violent attacks he has personally experienced, he has done extensive research on violent attacks: how they happen, how victims respond, how the body & mind respond to extreme stress and the psychology of criminals. He’s studied knife, stick & firearm tactics.

“Clear’s Street Kung Fu is the smartest approach to self defense I have ever seen, and I have seen everything the military spec ops community has to offer from Delta and CIA to the British SAS.” 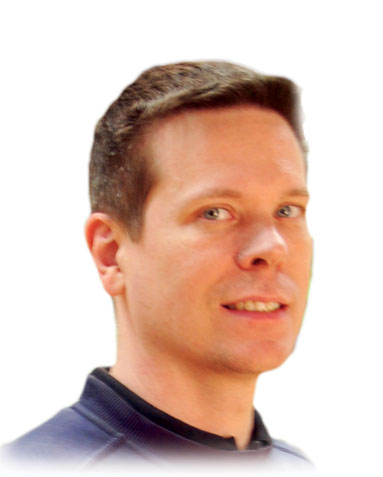 Sigung Richard Clear recognized a need for fast, effective self defense strategies over 20 years ago.

He developed the 1 Hit/Touch Knockout program to make smart self defense accessible to average people with minimal time and training.

The Basics of 1 Touch Knockouts is a streamlined course that will teach you how to hit harder with less effort, and how to train the skill for realistic self defense.

Best of all, you can train all of these skills completely solo, so you don’t need to worry about matching up your training schedule with a partner. Build these skills whenever you have free time!

We’ve also included instruction on how to use materials (like breaking boards) to test the quality of your hits, and to make your training as realistic as possible.

Normally this level and quality of self defense training would cost hundreds, maybe thousands of dollars.

Fortunately for you, at Clear’s Martial Arts we believe everyone deserves a long and healthy life safe from harm. We are committed to making high-level self defense skill accessible to everyone.

Sigung Richard Clear normally gets $2500 or more to teach this material to private students, but right now you can get the Basics of 1 Touch Knockouts for only $47.

It’s like having a personal session with Sigung Clear.

Actually, it’s even better than that, because it’s a DVD. That means you can watch it whenever you want, as many times as you want, and keep learning from it for years to come.

But Wait, We’re Not Done Yet!

In addition to the top quality training in the Basics of One Touch Knockouts DVD, you’ll also receive three special bonuses!

The escapes featured in this video are meant for real use on the street, where your life may depend on it. In this video you’ll learn to destroy the grabs, tackles, and holds that would otherwise prevent you from escaping a life threatening situation.

With the rise of MMA, grappling is a more and more frequently used strategy among street thugs. This is especially true in multiple attacker situations, where a grappler can reasonably rely on his buddies to take you out IF he can hold you in place for a full second.

That’s all it takes in a real fight.

One second — or less — is all you get to Escape from Holds.

These escapes are DIRTY AND UNFAIR. These are not the type of maneuvers you would see in the UFC. The principles behind the escapes are easy to understand and use, highly effective, and many of the techniques can be learned just by watching the DVD.

This DVD shows you how to use those principles in order to escape from grabs, tackles, and holds of every type we commonly see today. Seeing the principles applied effectively in a variety of situations helps students to fully own the fundamentals.

It also makes it easy to apply the principles to any other kinds of grapples or holds you care to be prepared for. If there’s something we didn’t cover on the DVD, or if some new kind of grab becomes popular in the future, you’ll still know exactly what you need to do to deal with it.

IF you know the strategies in Dirty and Unfair Escapes from Holds!

At its lowest price this DVD sells for $35, but we want you to have it for free as a Special Bonus when you order.

You may or may not realize it, but Tai Chi is actually a highly effective martial art.

The stuff you see the seniors doing in the parks can be lethal if trained correctly!

In fact, when done right Tai Chi is a stunning example of high level martial artistry. It is meant for older players, and so Tai Chi tends to end fights on first contact.

Some of the fighting concepts you’ll learn from a study of Combat Tai Chi are:

And much, much more.

The Introduction to Combat Tai Chi will give you a firm grasp of how Tai Chi fights and the many advantages of softness. Normally this DVD would sell for $25 at its very lowest price, but today it is yours as a Free Bonus!

Clear’s Martial Arts is home to the most accessible, understandable, and in depth instruction available on martial arts. Our long distance courses are second to none.

Our Silat program is the foundation for our hard core self defense courses. As a member you’ll get full access to everything in the Phase 1 and Phase 2 Silat programs.

Tai Chi is the art of relaxation under pressure, and in our unique program you can learn from our extensive library of Tai Chi training videos.

Literally hundreds of hours of instruction are available to our students, and you can join their ranks as a Special Bonus.

As soon as you complete your order today, you’ll be sent out an email telling you how to get access to all of this for one month.

***YOU WILL NOT be billed for this service unless you choose. Your purchase does not obligate you to a membership or subscription, and there is nothing to cancel. You only sign up if you choose to, and then you can cancel at any time.

This Amount of Martial Arts Training Would Cost $$$THOUSANDS$$$

To get lessons like this from a quality instructor would normally cost thousands of dollars.

Even at their best prices, these DVDs combined would still be $229.

Today they are yours as free gifts when you get your copy of the Basics of 1 Touch Knockouts!

Get the Basics of 1 Touch Knockouts…

Plus all 3 Free Gifts…